The new building of the Munich Volkstheater emerged from a Europe-wide procedure that the city of Munich had put out to tender. Thanks to the collaborative efforts which had already proven successful in several projects in the past, Georg Reisch GmbH & Co. KG, as a team with its specialist planners and the architects from LRO Lederer Ragnarsdóttir Oei, was able to secure the commission.
Designing a theatre building is an exceedingly difficult task. For one thing, it calls for excellent architecture – because the endeavor results in a building that demonstrates what the public sector understands building culture to be. For another thing, the primarily prestige-related ambition relates to the building’s impact within the urban space, on the lobby and, with slight limitations, also on the auditoriums. For the latter, the technical requirements of acoustics and lighting technology have a major influence on the interior design. The stage curtain manifests the boundary between those spaces that constitute a special aesthetic challenge and those that, due to their functional relationships – paired with their extreme technical requirements – demand an entirely different approach. Whereas the smaller part must please the attending public, the much larger backstage part of a theatre caters to the production and the staging of performances.
The site is located on the premises of what had previously been Munich’s municipal abattoir and stockyard. In addition, one wing of the existing building complex was to be integrated into the project. The aim was to create a new building that is sufficiently distinctive while also reflecting the history of the place. All in all, a new urban district – with residential buildings, infrastructure facilities and educational and cultural institutions – is currently being created on the approximately 50-hectare site of the old stockyards. The Volkstheater is a focal point by virtue of its size alone, and it forms an edge to the development, delimiting it from the densely built neighbourhood to the west.
Münchner Volkstheater meets abattoir: what does this mean for the cultural institution’s physical appearance? Parts of the abattoir to the north of the site are still in operation. Bricks are a prominent characteristic of the existing buildings – an industrial architecture composed of historicizing remains from the 1920s and, by way of contrast, unadorned, large-scale post-war buildings. So it was a natural choice to use brick for the outer shell of the new building.
Between the existing historical building, which is a narrow linear block on the north side of the site, and the new lobby, we placed a courtyard that opens out to the street through a large arched opening. The archway connects the old and new building. Opposite this, the facade of the new building opens up at the main entrance. The adjoining portion of the courtyard has benches and tables for guests of the theatre restaurant, which is also accessible from here.
Since in the summer months the trees in the small square impair the visibility of the theater entrances, there is a stele at the interface between the archway and the new building, which also indicates the use of the theater behind the modest old buildings as a sign in the urban space. The workshops are located on Tumblingerstrasse and offer passers-by a glimpse behind the scenes of the theater.
The plasticity of the building and its height graduation result from the functional conditions. The technical building systems, which are set back and form the next higher layer, are encased along the thermal envelope with a folded grid structure made of fine metal rods. The stage tower received a semi-transparent membrane facade.
The lobby, as well as the vestibule and the gastronomic facility, will have generous glass facades that can be fully opened towards the courtyard in summer. The elongated configuration of the lobby results from the plot’s geometry. It catches the eye with its distinctive color scheme. The stage zones and the area for deliveries, workshops and storage rooms occupy the southern part of the permissible building footprint, and in between are the main auditorium, which seats 600 people, and a second venue with an audience of 200. The administrative tract forms the eastern side of the building and is connected to the existing buildings.
In mid-October, Artistic Director Christian Stückl will open the house with a first performance. 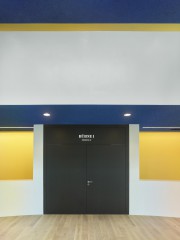 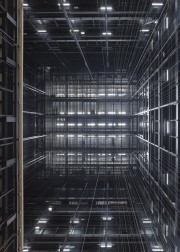 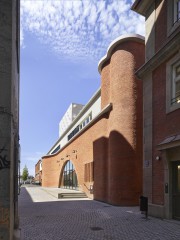 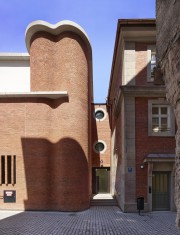 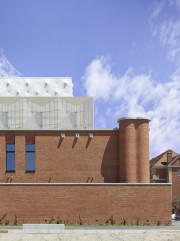 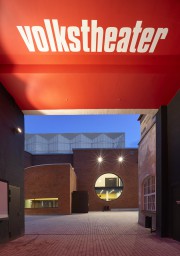 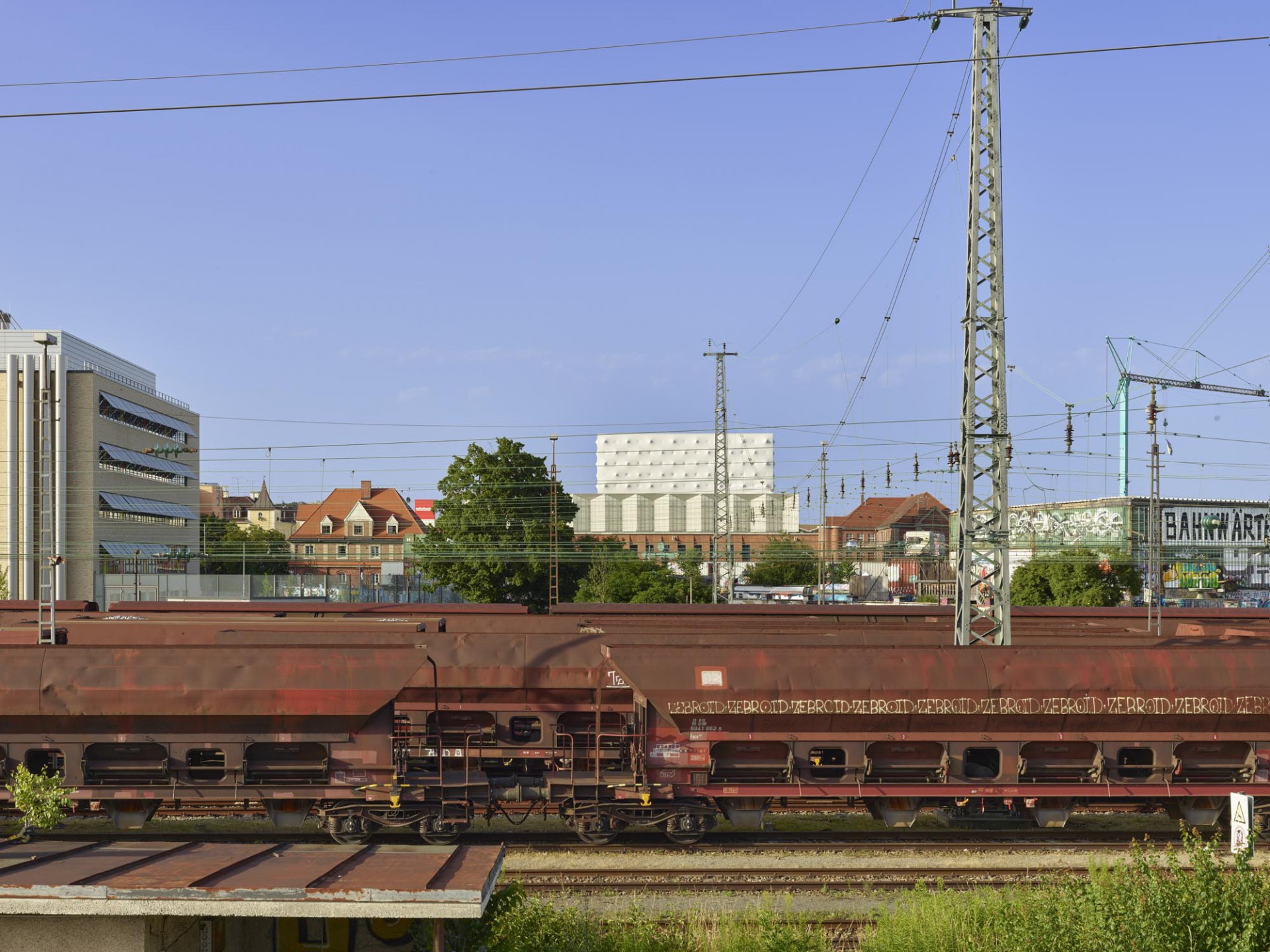 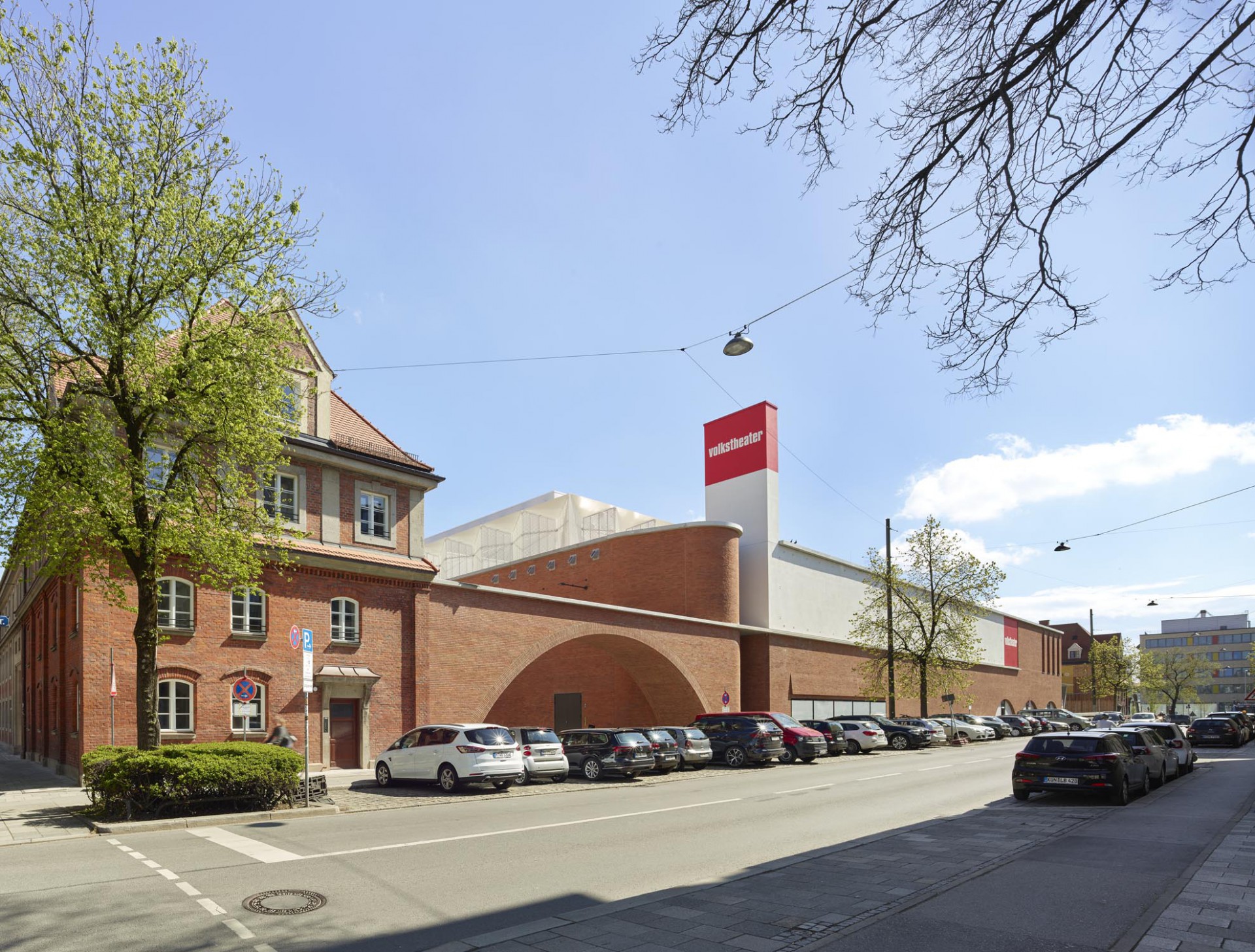 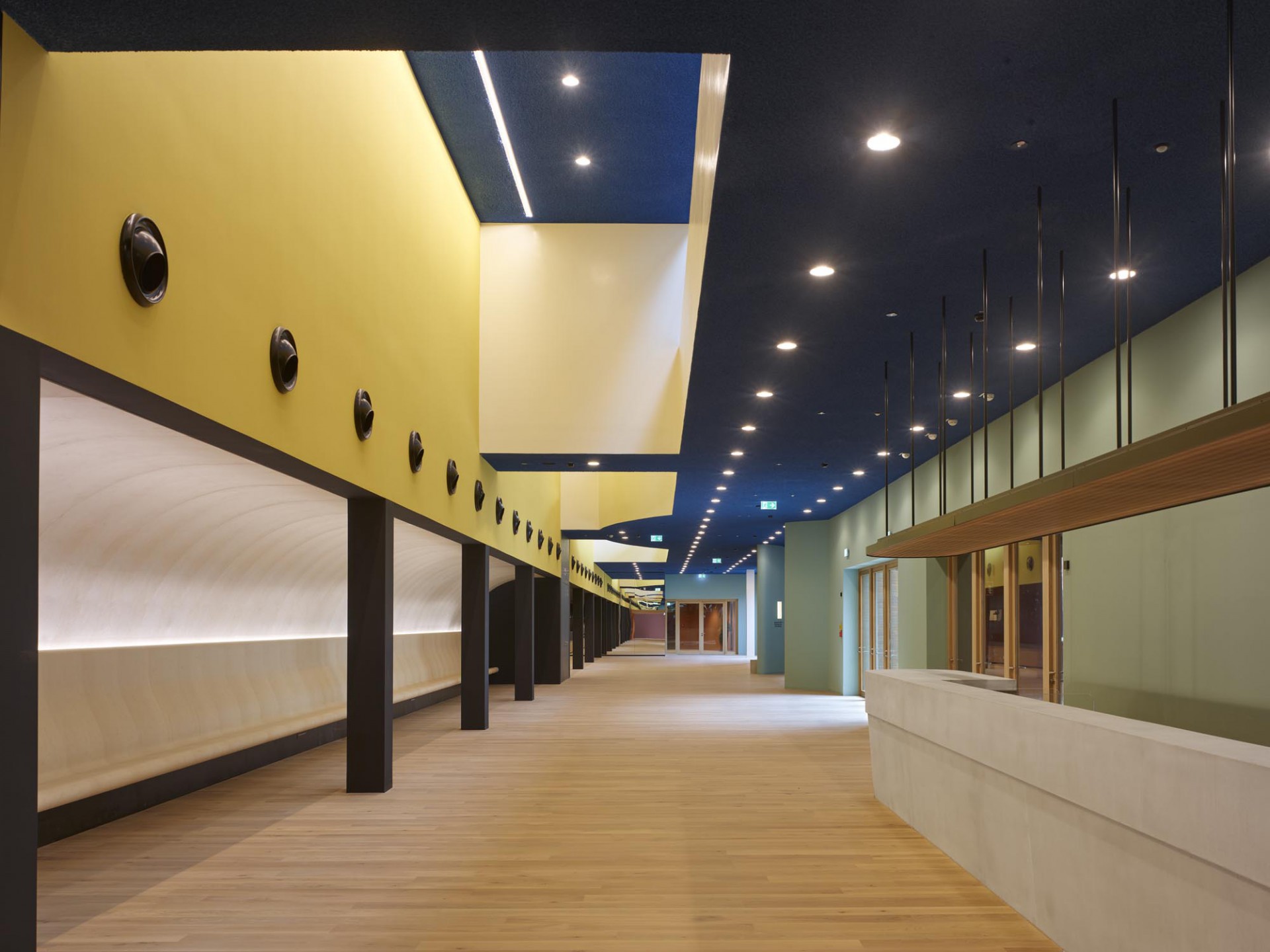 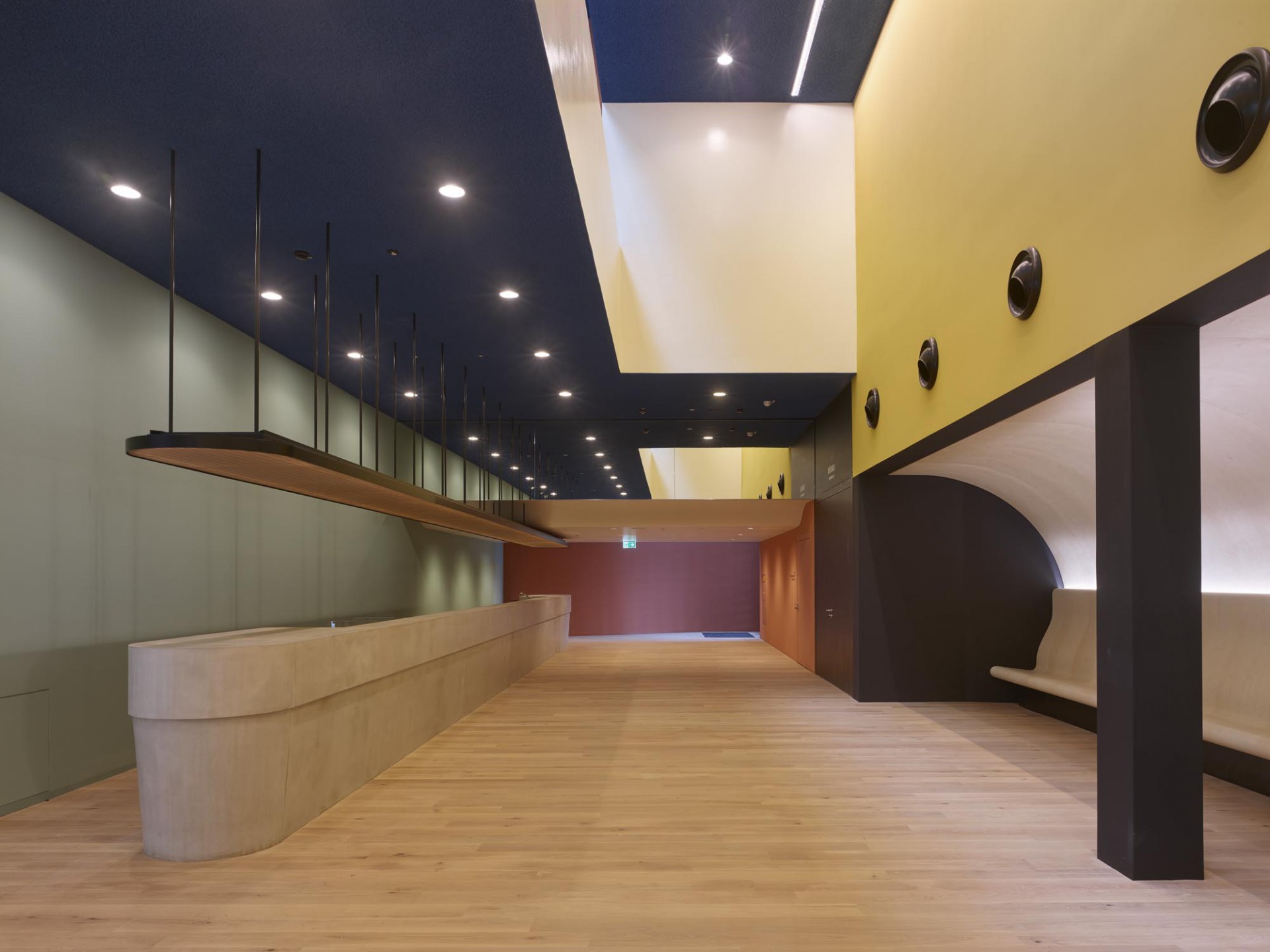 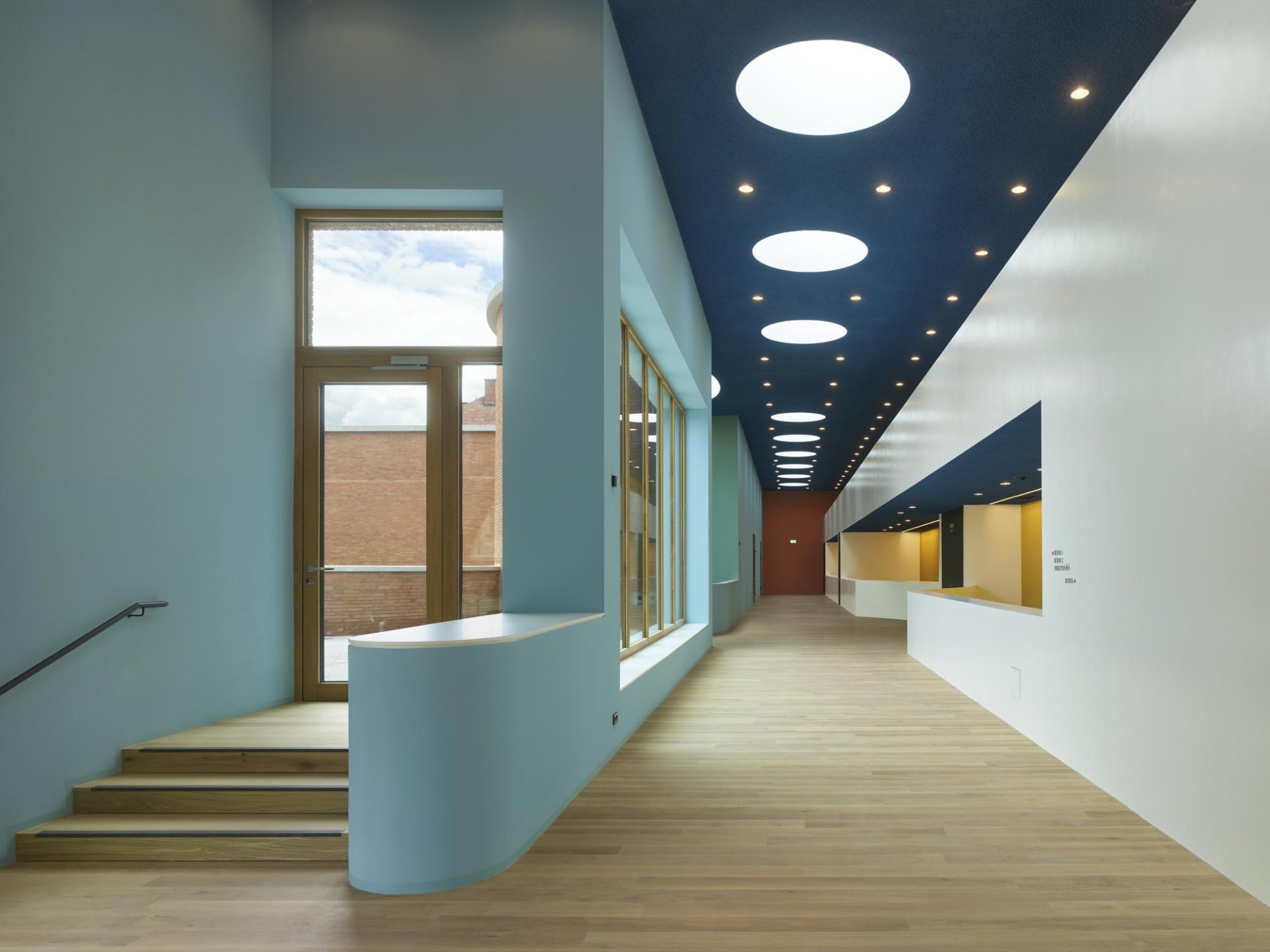 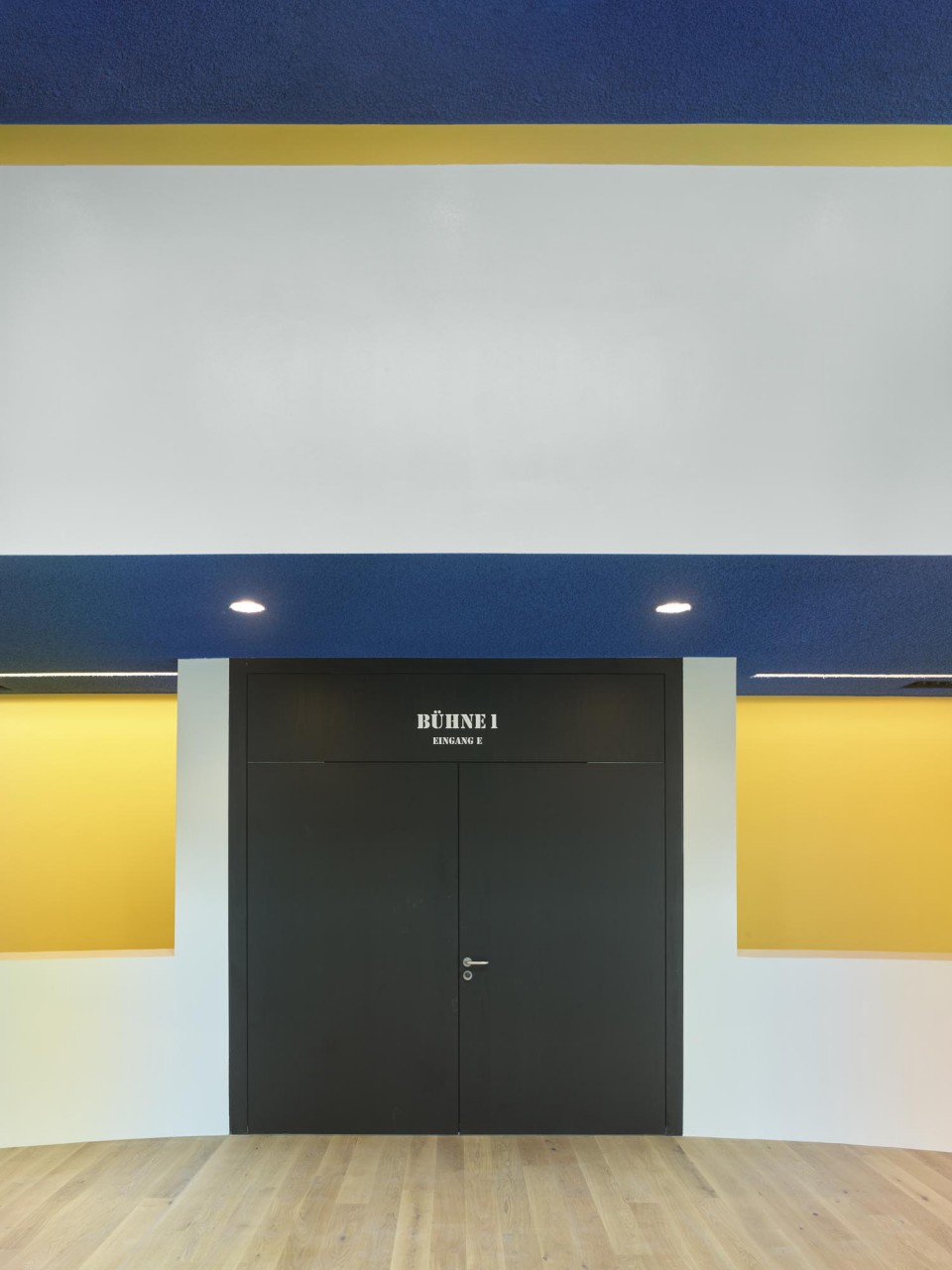 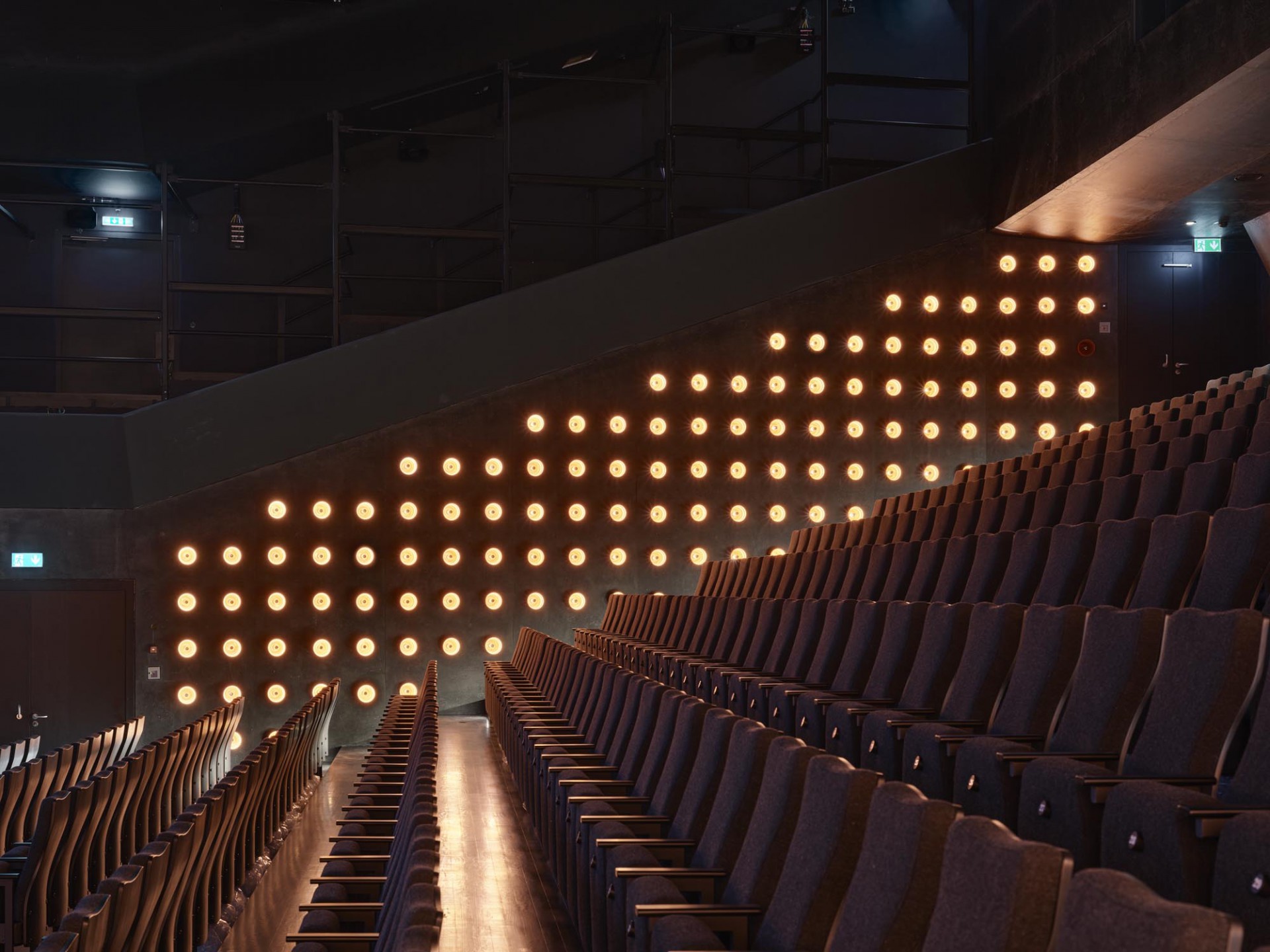 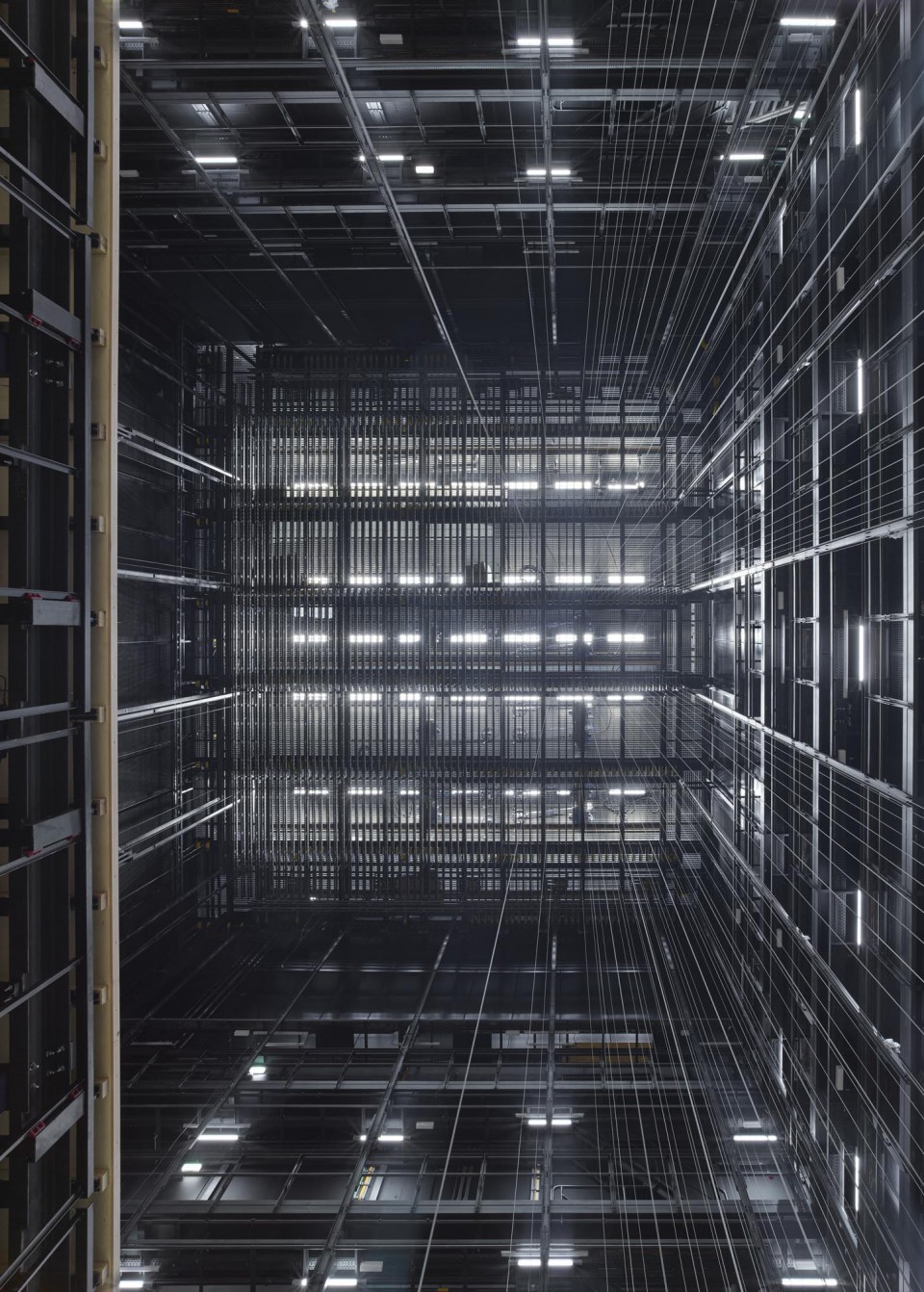 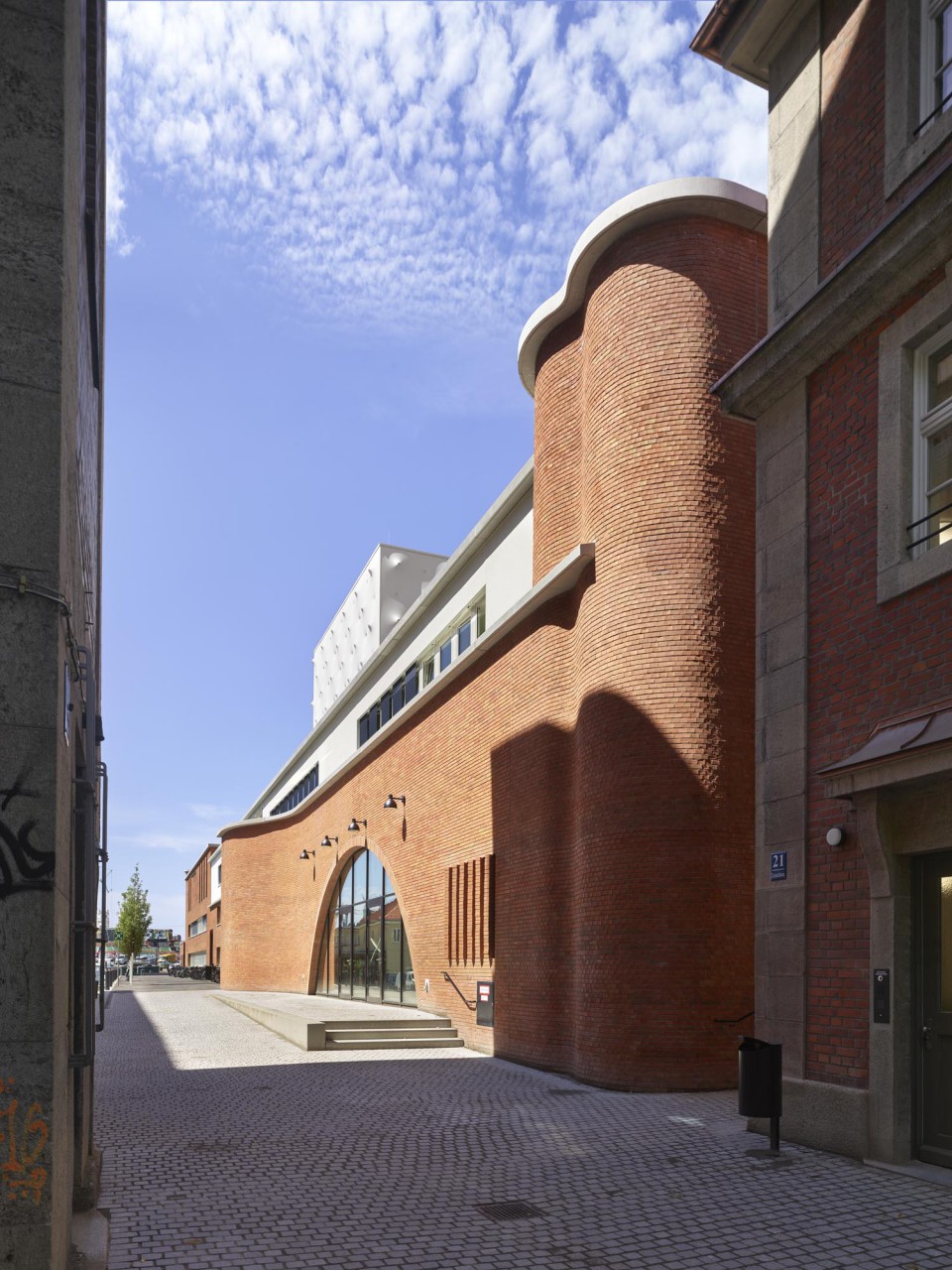 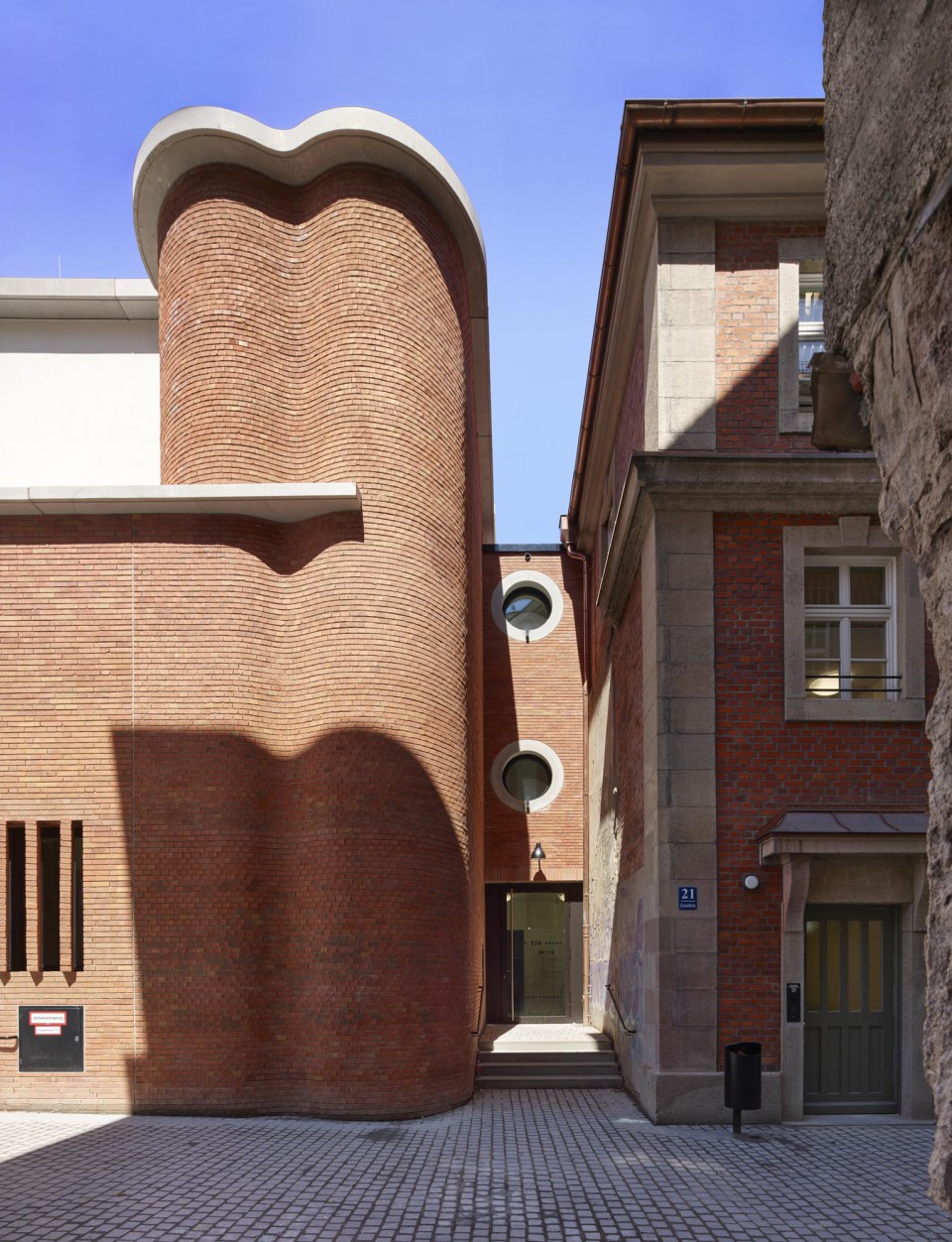 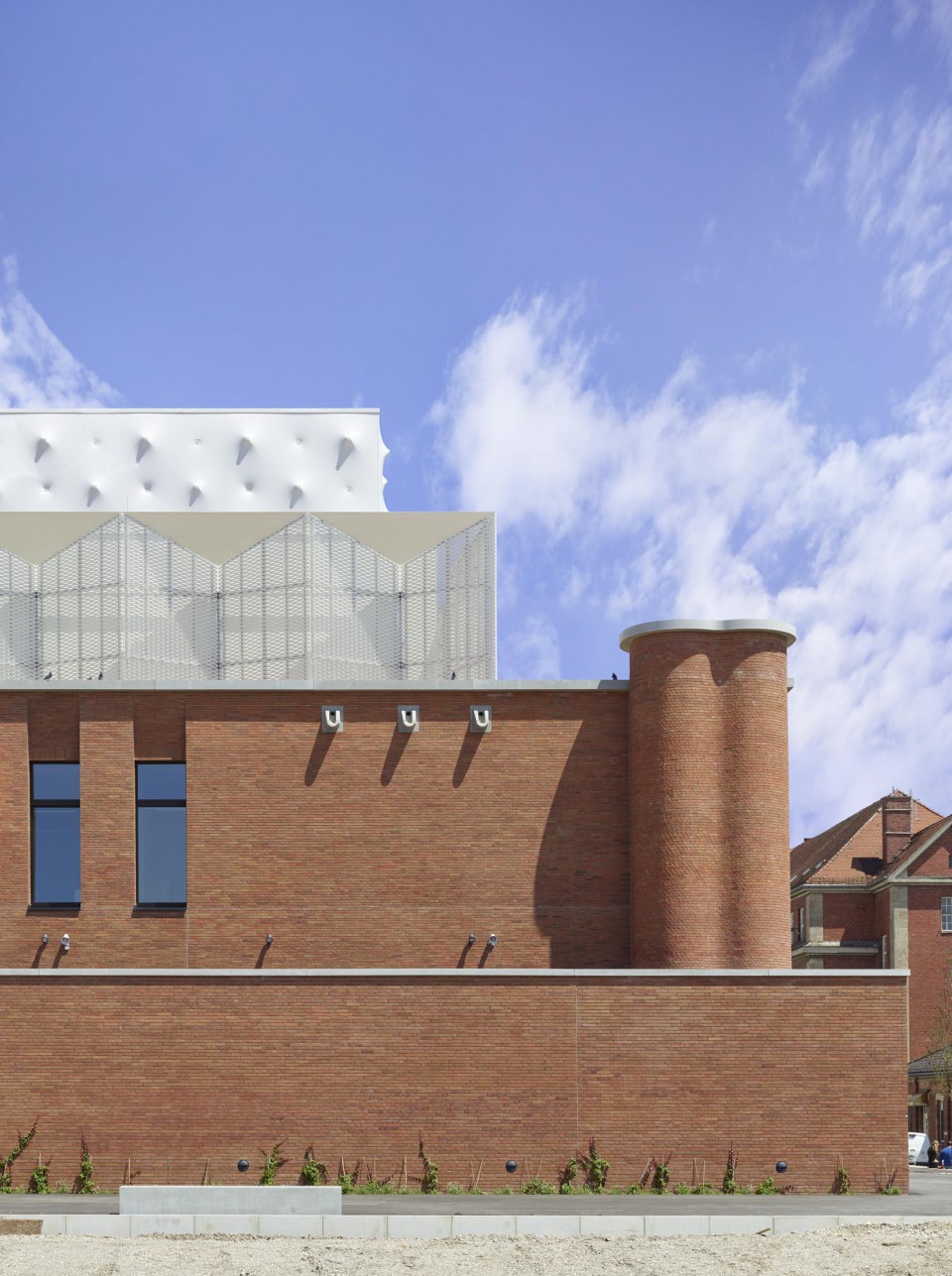 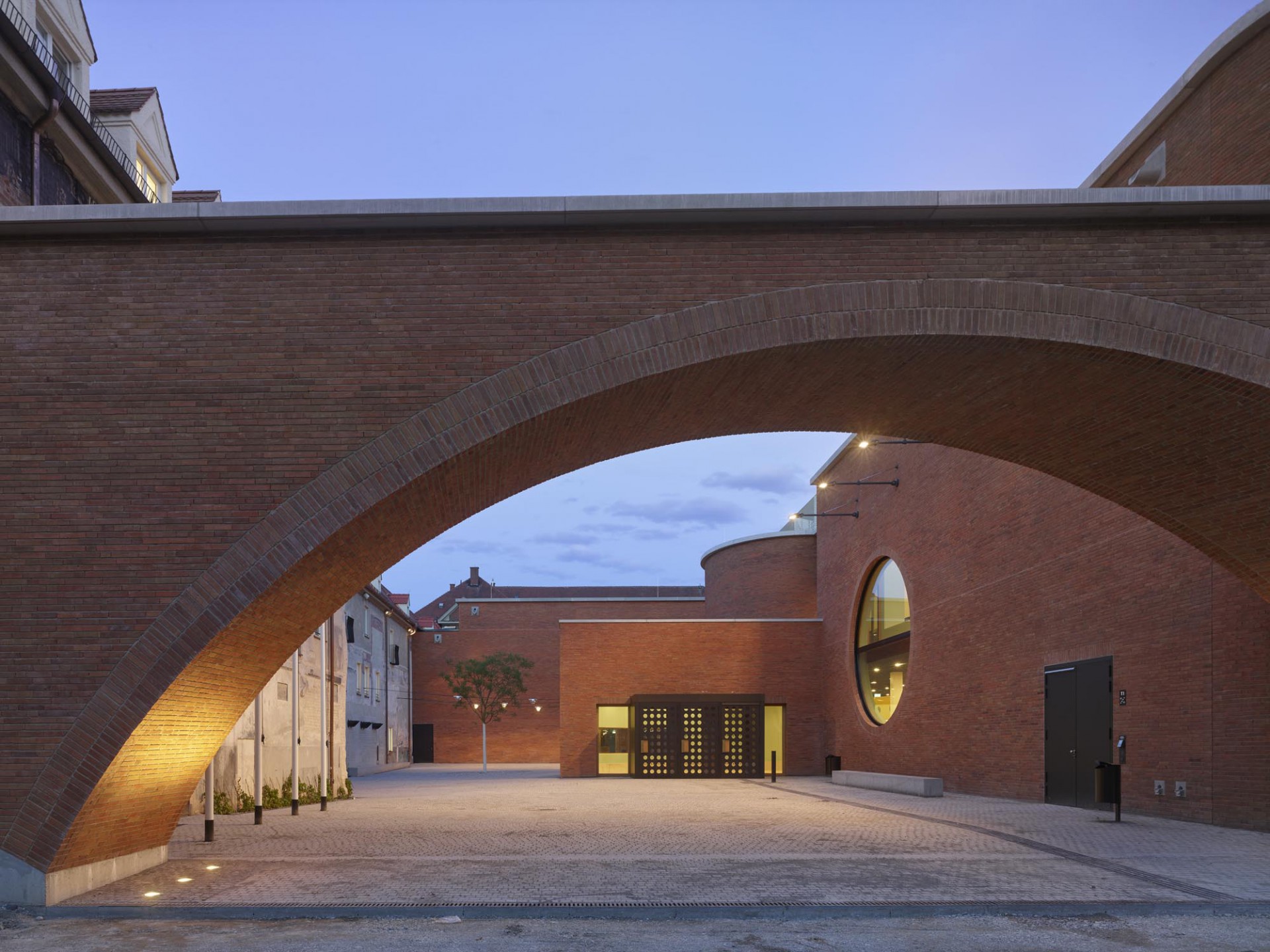 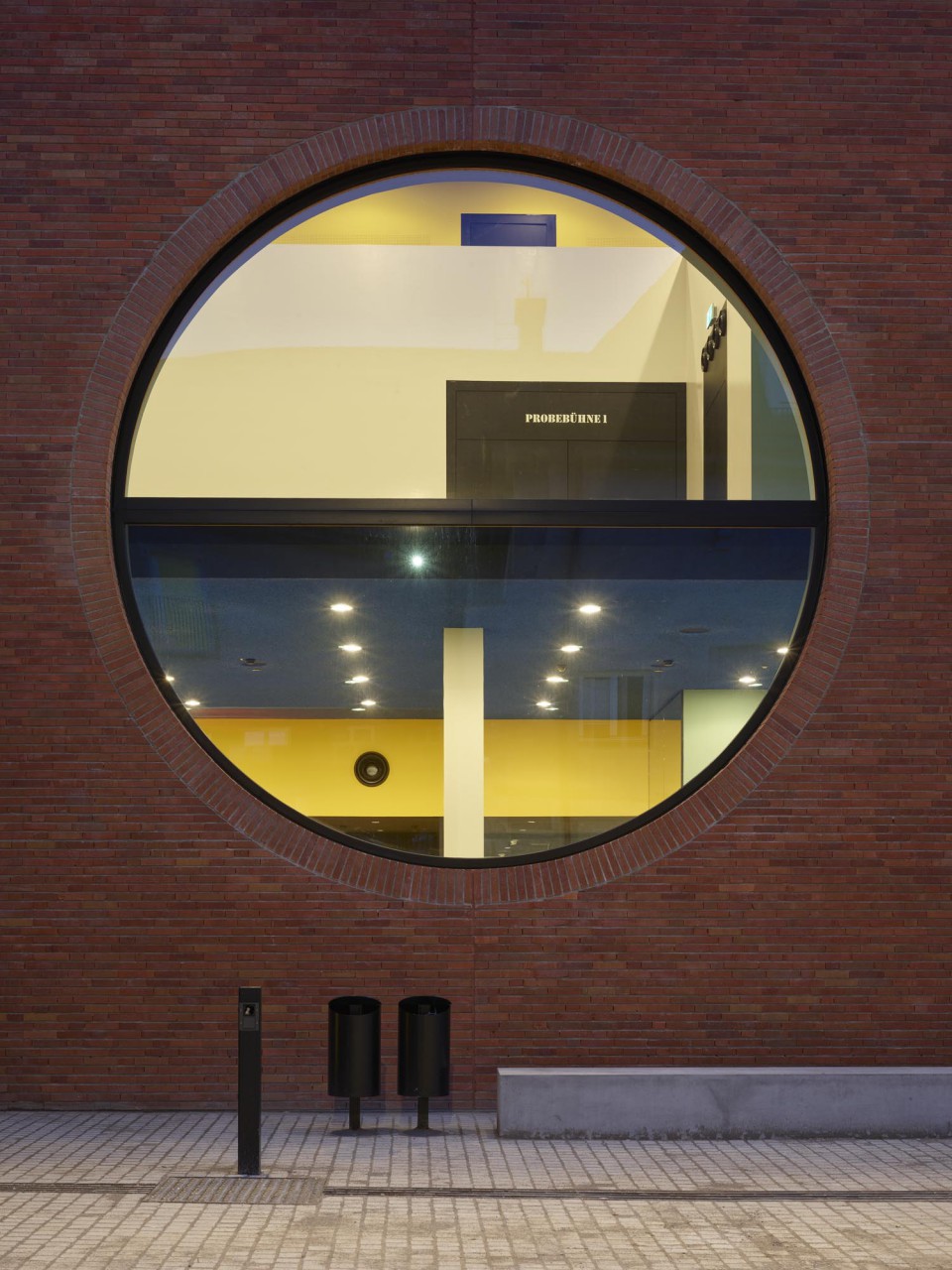